Unless otherwise stated, variations are expressed in comparison with results at 31 December 2014

At the end of 2015, a year marked by a deterioration in the global economic environment, Coface recorded a slight increase in net income (group share), at €126M (€125M in 2014). Turnover for the year grew by 3.4% (+1.2% at constant scope and exchange rate), supported by emerging markets. The Group’s loss ratio net of reinsurance has stabilized over the last six months, at 52.5%. Coface is prepared for Solvency II, which came into force on 1 January 2016. The ratio of capital required to cover subscribed risks stands at 147%7, a level in line with Coface’s risk appetite and dividend pay-out policy of 60% of net income. 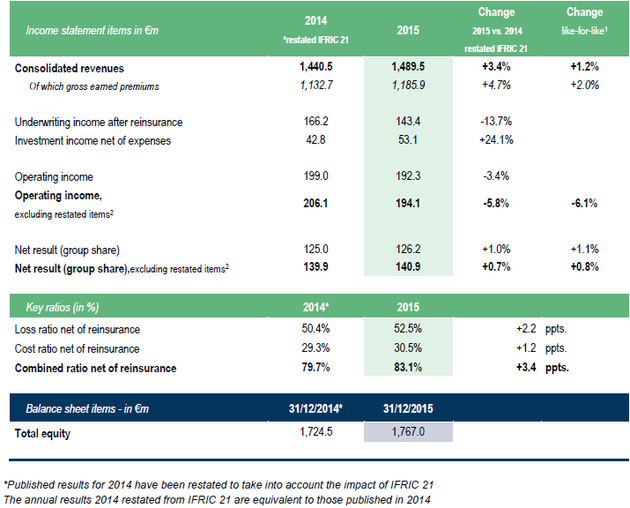 In 2015, Coface’s consolidated turnover was €1 489.5M, up 3.4% compared with 2014 (+1.2% at constant scope and exchange rates). This increase is a consequence of the commercial strategy implemented by the Group, based on product innovation, multi-channel distribution and the strengthening of its sales processes and sales monitoring.

New contract production was lower than in the previous year, which was marked by the signature of some large contracts. Retention of our client portfolio was good, at 88.2%.

The competitive environment and sound profitability of contracts in mature markets weighed on pricing throughout 2015. However, this price pressure remained controlled: the price effect on contracts was stable compared to 30 September 2015, at -2.4%.

Growth in the Group’s turnover was supported by emerging markets. In the United States, the reorganization of the entire country’s agency network explains the contraction in performance. In mature markets, where contracts profitability is higher, competition remained fierce and put pressure on prices.

The loss ratio net of reinsurance stood at 52.5%, stabilized over the last six months as a result of reducing exposure to the most fragile companies and sectors. During this period Coface continued to reduce its coverage, particularly in emerging markets, and the effects of this approach are materializing progressively, depending on the payment behavior.

In total, the combined ratio stood at 83.1% at 31 December 2015, up 3.4 points compared with 31 December 2014, reflecting the deterioration in the macro-economic environment over the last year.

At 31 December 2015, IFRS equity (group share) was €1 760.9M. The change in equity is mainly the result of positive net income of €126.2M offset by the distribution of €75.5M to shareholders and a decrease in re-evaluation reserves of financial assets ready for sale.

Coface is prepared for the new regulatory framework, Solvency II, which came into force on 1 January 2016. In this context, Coface plans to complete its capital management tools and intends to set up a contingent capital line to protect its solvency during extreme case scenario6.

Calculated on the basis of the standard formula, the coverage ratio of required capital to insurance and factoring risk coverage was 147%7, a level in line with the Group’s risk appetite and dividend5 pay-out policy of 60% of net income per share, proposed again this year.

Ratings agencies Fitch and Moody’s reconfirmed the Group’s ratings (IFS) at respectively AA- and A2 (stable outlook), on 17 September and 13 October 2015.

Work is on-going by Bpifrance to prepare for the transfer of public guarantees activity currently carried out by Coface on behalf of the French State. The transfer is subject to modification of the applicable legislative and regulatory framework8, which will come into effect by decree. Coface will continue to be remunerated by the French State until the transfer of this activity becomes effective, at a date which is not yet known.

The current macroeconomic environment is demanding (weak growth in advanced economies, greater risks in emerging markets, and the volatility of financial markets), and no significant change in this situation is anticipated for the year 2016. In the absence of significant rebound in global activity, and taking into account the transfer of the management of the public  guarantees activity, the targets of growth and profitability (return on average tangible equity or RoATE) that Coface settled two years ago for the period ending 2016, will not be achieved. However, Coface's business model, its financial strength, and its pay-out ratio of about 60%, are not undermined.

As announced on January 15th 2016, Xavier Durand takes over from Jean-Marc Pillu as CEO of Coface with effect as from today. Xavier Durand, 52, a graduate ofPolytechnique, spent most of his career in GE Capital. Over the last 25 years he has acquired senior-level operational experience in general management of regulated financial services in more than 30 countries.

Commenting on his new appointment, Xavier Durand,CEO of Coface, said:

« I am proud to be at the head of this great company: Coface is a world-wide recognized brand and the Group has in-depth expertise.

My priorities will be the following:

With my leadership team, and after an initial settling-in period, I will define the actions to strengthen Coface’s profitable growth over the long-term. I begin this work today and I will take the opportunity of our quarterly updates to keep you informed of our progress. »

1 Constant scope and exchange rates. Published results for 2014 have been restated to take into account the impact of IFRIC 21.The annual results 2014restated from IFRIC 21 are equivalent to those published in 2014

3 Internal overheads are restated to exclude an exceptional provision of €3.2M

5 Distribution subject to approval by the Annual General Meeting of Shareholders on May 19th 2016. 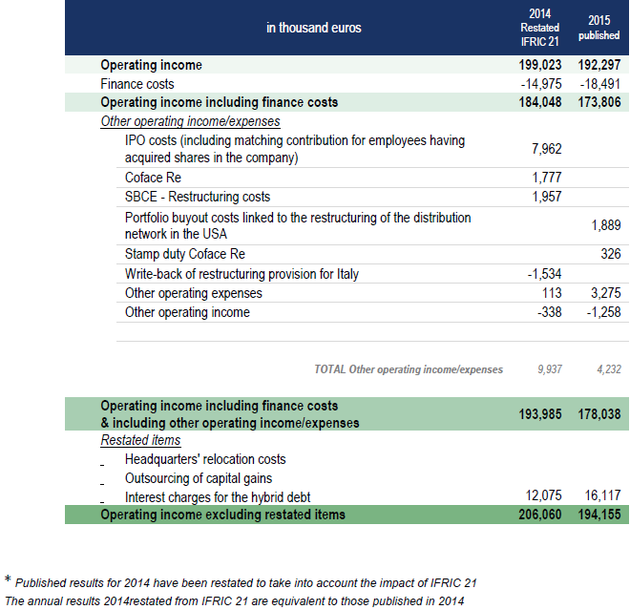