2015 was a good year for Central and Eastern Europe. The average GDP growth was 3.3%, after 2.6% in 2014. Private consumption was rising due to declining unemployment and increasing wages. EU funds supported investments. In short: CEE was faced with a booming economy. But how did the largest businesses perform?
The international credit insurance company Coface presents its eighth annual study on the Top 500 companies in Central and Eastern Europe: the Coface CEE Top 500. It ranks the 500 largest businesses in the region by their turnover and additionally analyses further facts such as number of employees, the framework of the companies, sectors and markets.

“The development in the ranking of the Top 500 companies illustrates the economic conditions of the past year – and it was a successful one. Economies benefited from rising domestic demand due to growing private consumption, which was supported by declining unemployment as well as growing wages, and increasing investments in most economies. Good export rates due to the gradual recovery of its main trading destination Eurozone (GDP growth by +1.6%) and the important support by EU funds made 2015 a year with sound growth for businesses,”explains Katarzyna Kompowska, Coface Region Manager Central and Eastern Europe.  “As a result, the Top 500 companies finished 2015 with an increase in turnover and a stable employment rate.”

Poland is by far the largest economy in the region and again home to most of the top players in CEE. Due to its strong domestic demand, it went through the financial crisis relatively well. In total, 167 companies are represented in the ranking, although with nine less than in 2014. The Polish economy has been delivering very solid growth rates of above 3% since 2014.

Czech Republic is the country with the highest growth rate (+4.2%) in CEE and one of the lowest unemployment rates in the entire EU (5.1%). The country is second in our ranking. Public investment boosted the economy together with the efficient use of the old EU budget. 71 businesses are listed in the ranking of the biggest companies. It is the fourth consecutive year with increasing numbers. Total turnover grew by +3.1% and net profits by +16.9% to 4.9 billion EUR.

Hungary stays on the podium again but lost one rank. In total, 69 Hungarian companies are represented, which is four fewer than in 2014. Nevertheless, the remaining Hungarian giants reported the highest turnover growth (+13.8%) of all countries. The background of this third rank lies in the solid growth rates since its recession in 2012 (+2.9% in 2015).

The ongoing upward trend was recorded by the majority of the sectors in the CEE Top 500 as well. 12 out of 13 sectors increased their turnover compared to the previous year. Strong rises were achieved by textiles, leather & clothing with +14.8% and automotive & transport with +10.3%. The traditionally most important sector in the ranking is still minerals, chemicals, petroleum, plastics & pharma with 111 companies out of 500. Although it is the only sector with a decrease in turnover (-8.3%), which is an negative effect of the oil crisis.

Favourable business conditions are extended into 2016.“The forecast for the CEE region in 2016 is nearly at the same level of 2015 with an estimated average growth rate of 3.0%. A further improvement of the labour market and growing confidence will strengthen the household consumption as the main growth driver of CEE economies,”adds Grzegorz Sielewicz, Senior Economist Central and Eastern Europe. The contribution of investments will not be as high as last year due to a slow start of new EU co-financed projects weakening the expansion of construction sector and various other industries cooperating with it. On the external side CEE countries will remain active exporters, however the slowdown of global trade can hamper their ambitions. 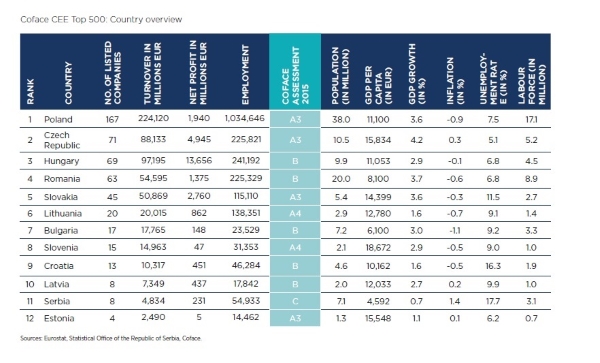 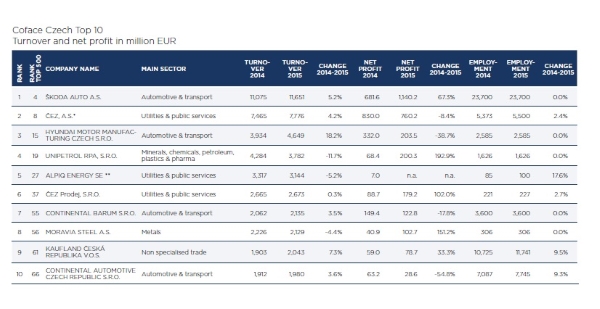