Labor Shortages in Central and Eastern Europe Countries: A Growing Concern for Businesses

Labor markets in the Central and Eastern Europe (CEE) region are continuing to improve. Unemployment rates have reached the lowest levels ever recorded and most CEE economies are enjoying lower unemployment than the EU average. Rising wages and low inflation, amid improving consumer sentiment, have made household consumption the main driving force behind economic expansion.

Nevertheless, while households and the region’s overall economic activity are benefiting from these developments, corporates are suffering. The latter are faced with the strengthened wage bargaining power of their employees and are forced to accept higher compensation costs. Dynamic external and domestic demand, the low birth rate and emigration have all contributed to labor shortages. A rising number of companies are reporting this as a barrier to business expansion. Job vacancies are especially high in the Czech Republic and Hungary.

The increases in wages currently exceed labor productivity gains. Fortunately, regional labor costs remain much lower than in most Western Europe. On average, labor costs in Western Europe are more than 3 times higher than in CEE countries. This comparative advantage, associated with the region’s geographical and cultural proximity, should endure - although it could be eroded if emigration of the youngest and most skilled workers continues to weigh on productivity. Companies will continue to report labor shortages, especially with regards to qualified employees. Recent surveys indicate that skilled professions, drivers and engineers are among the vacancies that are the hardest to fill by employers in the CEE region.

Labor shortages could be alleviated by encouraging emigrants to return and by more immigration. This would necessitate improvements in governance and addressing the reluctance in accepting migrants. Developing vocational training and tertiary education, as well as encouraging labor participation among the ethnic minority, female and senior populations, would also help to address the situation. Labor markets in the CEE region are continuing to improve.

DOWNLOAD THE PUBLICATION "Labor shortages in Central and Eastern Europe countries: a growing concern for businesses" 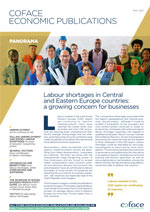