Coface conducts payment studies for a number of different economies, including China, Morocco and Germany. This survey marks the first such edition for Brazil, with the objectives being to better understand the country’s corporate payment habits and the health of its economy.

Brazilian companies are currently faced with a challenging environment. GDP underwent an accumulated contraction of 7.4% during the two years of 2015-2016. Credit conditions deteriorated, against a backdrop of more restrictive credit supply and a tighter monetary cycle (which finally started to marginally ease in October 2016). Moreover the car-wash operation – the biggest and longest corruption investigation ever carried out by the Federal Police of Brazil - has played an important role in the economic situation. It has not only influenced the performance of major conglomerates involved in the scandals, but also impacted the activities of companies that rely on sales to the groups under investigation. 2017 has just begun, but the year’s GDP forecast is already lackluster. Although activity is expected to leave recession, growth is forecast to achieve a meager 0.4%.

The bleak economic environment has overshadowed payment behaviour. Our payment study revealed that, in 2015, 75% of the interviewed companies received requests for payment extensions from their clients. In addition, the majority (58%) observed an increase in their delinquency rates in 2015, compared with 2014. The outcome for 2016 was more divided. The survey found that payment experiences in 2016 had deteriorated in comparison to the previous year for 46% of companies. The same percentage reported that the situation had remained stable in 2016, while a minority of 8% have seen improvements. 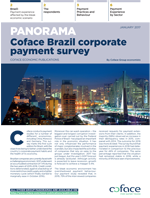