The global economy remains stuck in a "Japanese-style" trap of sluggish growth, despite ever more expansionary monetary policies

Good growth figures in Europe, rebound in many emerging currencies and oil prices: there was an increasing number of signs of a lull in spring before the British referendum. But this calm is in appearance only, as many "micro" risks appear as soon as we scratch this "macro" surface. And the two largest economies in the world, the United States and China, whose country ratings have been downgraded respectively to A2 and B, perfectly illustrate this tendency. In China, the most widely followed economic indicators, such as GDP growth, retail sales and industrial production, show that growth is stabilising. But company insolvencies are growing sharply. In the United States, hidden behind the continuous fall in the unemployment rate, there are companies whose profitability is being eroded and which are investing less.

But the parallels between China and the United States stop there, as these "micro" vulnerabilities are different on the two sides of the Pacific. In China, companies are suffering from overcapacity and excessive debt, which will take time to reduce, while in the United States, companies' problems
are more cyclical than structural: six years after the beginning of the recovery process they derived the full benefits from, the turnaround point has been reached and resulted in a rise in insolvencies in early 2016, for the first time since 2010.

If we add Japan (downgraded to A2 in March), it is therefore the three largest economies that are seeing their companies' credit risk increase in this first half of the year. Unsurprisingly, Asian countries are negatively affected by the Chinese slowdown (downgrading of South Korea, Hong Kong, Singapore and Taiwan).

Before the British referendum, Europe was - for a change - the herald of good news: the country assessments of France and Italy have actually been revised upwards (respectively to A2 and A3), under the effect of falling insolvencies, earnings that have stopped declining and ever more favourable lending conditions. Central and Eastern Europe is benefiting from the eurozone recovery: Romania, Slovenia, Lithuania and Latvia have been reclassified. In Europe, companies should therefore keep their positive growth momentum over the next few months, unless the consequences of the British referendum and other numerous political uncertainties spoil the party. 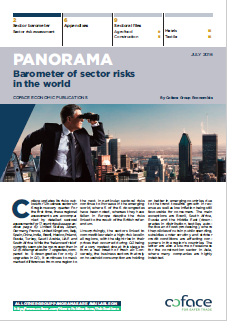 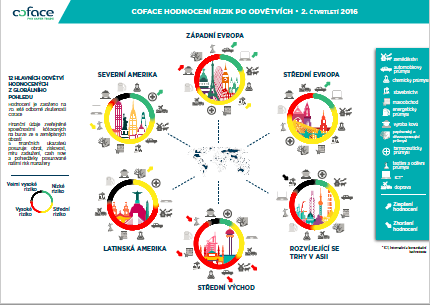