Fast recovery after a brief recession

The COVID-19-pandemic hit the Norwegian economy in the spring of 2020 in a fast and punctual way, as, not only the government had to introduce a lockdown of several weeks, but oil-prices also collapsed due to the absence of energy demand from abroad. The Norwegian energy sector represents 17% of GDP, 19% of investments and 52% of exports. However, what had been a problem in spring 2020 became a boost for the Norwegian economy, as global energy demand recovered rapidly. Production in the oil industry and in the refinery sector increased noticeably and the Brent-oil price rose almost constantly reaching on average 74 USD per Barrel in July 2021, a three-year-high. Oil-investments recovered fast and are further supported by the government’s tax relief package for the oil industry, which applies for all new development projects started by the end of 2022. Outside of the energy sector, the outlook for the Norwegian economy is positive but a bit muted. In total, Norway underwent three big COVID-19 waves, in spring 2020, November 2020-January 2021, and in spring 2021, the strongest one. Strong restrictions were implemented from the end of 2020 until late spring 2021, which resulted in a decrease of economic activity on the Norwegian mainland by -1.1% quarter-on-quarter in Q1 2021. Since then, the mainland-economy has recovered noticeably with stronger private consumption thanks to the lifting of the lockdown restrictions. The outlook for private consumption remains well oriented for the rest of the year. Many Norwegians will have again spent their summer holidays in Norway and supported the domestic market (Norway has typically a negative tourism-balance). Moreover, the labour market should further recover, without returning to pre COVID-19 levels before the end of the year. The extension of the furlough-scheme until the end of June 2021 should have additionally supported purchasing power. Some of the resulting higher income will be absorbed by an increase in consumer prices. However, the average inflation rate of 2.8% in 2021 will remain within normal limits. Higher private investment and a stronger demand for Norwegian products from the main trading partners like the UK, Germany or the Netherlands will also foster a stronger economic growth. For 2021, the government introduced new fiscal impulses of NOK 128.5 billion (3.6% of GDP), which are mostly concentrated in infrastructure projects, Green energy development and defence expenditures. Some of this will be financed via the increased CO2-tax - by 5%. Furthermore, several measures to support business and households were extended into 2021 with an additional NOK 500 million for business-relief schemes. The Norges Bank cut its key interest rate from 1.50% to 0% in 2020. Moreover, it provided additional liquidity to banks in form of loans of diverse maturities. For 2021, the Bank should hold its key interest rate at 0%. However, due to the robust economic development, we cannot rule out a first rate hike of 25 basis points before the end of 2021.

Public accounts are manageable thanks to the sovereign wealth fund

With increasing expenditures on exceptional support measures and only slowly increasing tax revenues, the government net lending should reach an even higher level than in 2020 (-11.4% of GDP after -10.4% in 2020). However, this will be largely balanced out via withdrawals from the sovereign wealth fund (SWF). In normal times, they are limited to 3% of the fund’s value, which corresponds to the expected annual return of the fund. In 2021, they will reach 3.7% (the same as 2020). The burden of the public debt will therefore remain moderate. The current account balance surplus will be boosted by higher oil and industry, as well as strong service exports, and creep back to its “normal” level.

With increasing expenditures on exceptional support measures and only slowly increasing tax revenues, the government net lending should reach an even higher level than in 2020 (-11.4% of GDP after -10.4% in 2020). However, this will be largely balanced out via withdrawals from the sovereign wealth fund (SWF). In normal times, they are limited to 3% of the fund’s value, which corresponds to the expected annual return of the fund. In 2021, they will reach 3.7% (the same as 2020). The burden of the public debt will therefore remain moderate. The current account balance surplus will be boosted by higher oil and industry, as well as strong service exports, and creep back to its “normal” level.

Bank transfers are by far the most widely used means of payment. All leading Norwegian banks use the SWIFT electronic network, which offers a cheap, flexible and quick international funds transfer service.

Electronic payments, involving the execution of payment orders via the website of the client’s bank, are rapidly gaining popularity.

Bills of exchange and cheques are neither widely used nor recommended, as they must meet a number of formal requirements in order to be valid. In addition, creditors frequently refuse to accept cheques as a means of payment. As a rule, both instruments serve mainly to substantiate the existence of a debt.

Conversely, promissory notes (gjeldsbrev) are much more common in commercial transactions, and offer superior guarantees when associated with an unequivocal acknowledgement of the sum due that will, in case of subsequent default, allow the beneficiary to obtain a writ of execution from the competent court (Namrett).

The collection process commences with the debtor being sent a demand for the payment of the principal amount, plus any contractually agreed interest penalties, within 14 days.

Where an agreement contains no specific penalty clause, interest starts to accrue 30 days after the creditor serves a demand for payment and, since 2004, is calculated at the Central Bank of Norway’s base rate (Norges Bank) in effect as of either January 1 or July 1 of the relevant year, raised by seven percentage points.

In the absence of payment or an agreement, creditors may go before the Conciliation Board (Forliksrådet), a quasi-administrative body. To benefit from this procedure, creditors must submit documents authenticating their claim, which should be denominated in Norwegian kroner.

The Conciliation Board then allows the debtor a short period to respond to the claim lodged before hearing the parties, either in person or through their official representatives (stevnevitne). At this stage of proceedings, lawyers are not systematically required. The agreement therefore reached will be enforceable in the same manner as a judgement.

If a settlement is not forthcoming, the case is referred to the court of first instance for examination. However, for claims found to be valid, the Conciliation Board has the power to hand down a decision, which has the force of a court judgement.

A case which is referred to the higher court will commence with a summons to appear before the municipal or District Court. The summons will be served on the debtor with an order to give the court notice of intention to defend if he so wishes.

Where a defendant fails to respond to the summons in the prescribed time (about three weeks) or fails to appear at the hearing, the Board passes a ruling in default, which also has the force of a court judgement. The length of proceedings varies from one court to another.

More complex or disputed claims are heard by the court of first instance (Byret). The plenary proceedings of this court are based on oral evidence and written submissions. The court examines the arguments and hears the parties’ witnesses before delivering a judgment.

Norway does not have a system of commercial courts, but the Probate Court (Skifteret) is competent to hear disposals of capital assets, estate successions, as well as insolvency proceedings.

Enforcement of a court decision

A domestic judgment is enforceable for ten years if it has become final. If the debtor does not comply with the judgment, the creditor can request compulsory enforcement of the judgment from the enforcement authorities, which will then seize the debtor’s assets and funds.

Even though Norway is not part of the EU, particular and advantageous enforcement mechanisms will be applied for awards issued by EU countries, such as EU payment orders or the European Enforcement Order, under the “Brussels Regime”. For decisions rendered by non-EU members, they will be enforced on a reciprocity basis, provided that the issuing country is party to a bilateral or multilateral agreement with Norway.

Private non-judicially administered reorganizations are common in Norway; even though there are not regulated by law. Debtors and creditors are free to make any kind of arrangements, but in practice the Debt Reorganization and Bankruptcy Act is often applied. A third party (a lawyer or an accountant) can handle the process if the parties wish it so.

Proceedings can be opened by court decision either from the debtor or creditor. The latter must guarantee for expenses related to the proceedings. The court will appoint a trustee and assess the need for a creditor committee prior to issuing a bankruptcy order and given the creditors time to file their claim (three to six weeks). All of the debtor’s assets are confiscated, the debt is evaluated and a list of claims is established. 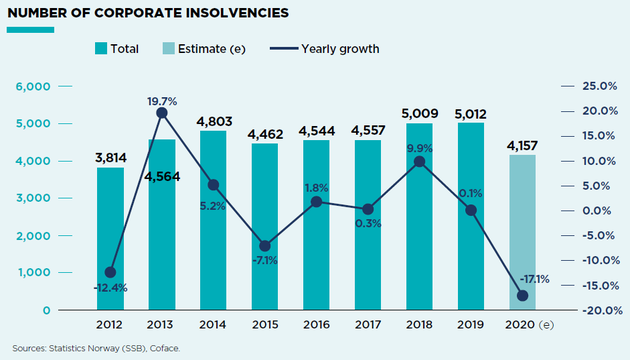