The 13th CEE Top 500 study provides an insight into the future and summarizes the region’s economic activity for the previous year. Moreover, it describes the condition of the 500 largest companies in CEE by their turnover.
This edition describes the struggles of the new Covid-19 pandemic environment as well as how companies adjusted to this new situation. In 2020, CEE companies adjusted well to the new pandemic environment even though the Top 500 companies’ turnover dropped in 2020 by 3.3%. Although many of them wouldn’t survive further lockdowns and restrictive measures without government subsidies, for others the Covid-19 pandemic was a period of profits and prosperity.
The 13th annual Coface CEE Top 500 ranking, answers questions, such as:

Find out what new companies entered the ranking, by clicking the link HERE. 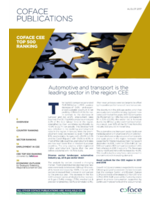 In 2017, Coface has launched the 9th edition of the Top 500 companies in Central and Eastern Europe - Coface CEE Top 500.

In the current economic climate it is very important to analyze the markets and the business environment in the countries of Central and Eastern Europe. This region has high potential for economic progress in Europe, so it is essential to monitor the business opportunities available in these countries.

The study classifies the strongest 500 companies in the region, taking into consideration both the turnover as well as additional factors such as number of employees, business sectors and markets where they are active.