In Southern Europe, the recession is deepening, particularly in Spain, Italy and Cyprus. Coface is forecasting a recession rate of 2%, 1.8% and 1.3% in these countries respectively in 2012. Another source of concern is the eurozone sovereign debt crisis, which is now affecting growth in emerging countries, where Coface has noted a slowdown in activity.

In this more difficult context for companies, Coface has lowered its country risk assessment for Cyprus, Spain, Guatemala, India, Italy and the Czech Republic. However, it has upgraded its assessment for the Ivory Coast, Indonesia, Nicaragua and Slovakia. This Risk Overview outlines the reasons why Coface has made these adjustments. It gathers the updated risk assessments on these 10 countries, and on 25 other countries too, whose situation has changed without requiring a modification of their risk assessments.

Coface has included two articles in the introduction. The first provides an update of the situation in Spain, a country where companies – all sectors and not just construction – are suffering from excessive debt and difficulties in the banking sector. The article outlines the methods to stem the dangerous deflationary spiral trapping the country. A second article gives an update on Chinese companies and their vulnerability to the choice of economic policy. The authorities have two objectives: support activity with a targeted budget policy and stay on course for a rebalancing of growth towards consumption.

will saving spanish banks save spain?

Spain is no Greece: The crisis gripping the monetary union’s fourth largest economy is the consequence of private rather than public indebtedness. Austerity can thus not be the solution since it further depresses domestic demand currently squeezed by the process of paying down corporate and private debt. This crisis is closely connected to the bursting of the speculative property bubble. But, as reflected in Coface payment-incident tracking records, construction has not been the only sector affected by insolvency with payment defaults up
sharply in agro-food, electrical equipment, distribution, and textiles. The core problem is centred on the banks, heirs to the very heavy private sector debt. All eyes are thus focused on the ultimate — doubtless high — cost of the bank reform with the creation of a bad bank and the restructuring of private sector debt constituting the two pivotal steps. Such radical approach augurs well for a modicum of growth albeit likely to be far below the levels reached during the heady days of the Movida. This alone will make it possible to halt the dangerous
deflationary spiral now gripping Spain.

Companies in China: Beneficiaries or collateral victims of economic policy?

Faced with the slowdown of economic growth early this year, Chinese authorities have been attempting at this juncture to juggle between two objectives: support economic activity via targeted fiscal policy measures and continue the efforts to establish more balanced growth by raising wages to spur consumption. How then have the economic policies affected companies? The wage increases — managed by the authorities to bolster consumption — have weakened many companies with their margins contracting since April. While the fiscal measures taken constitute real support for companies at this stage, a more aggressive stimulus with the opening of the floodgates on credit as in 2008/09 could, however, have collateral effects on companies in the private sector (steel, construction, textiles, toys). But the bad news streaming in from Europe has been piling up: bank crisis in Spain, recession in Italy, possible withdrawal of Greece from the euro zone, a string of events that could prompt Chinese authorities to opt for massive support for economic growth… at all costs. 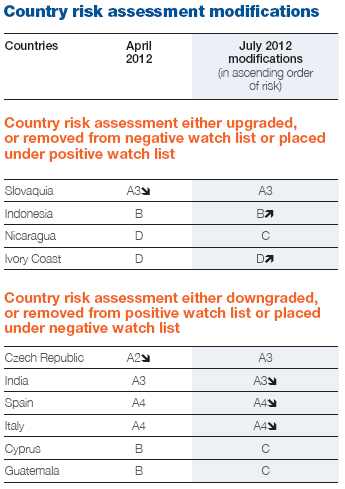 The country risk assessment assigned by Coface reflects the average level of short-term non-payment risk associated with companies in a particular country. It evaluates the extent to which economic, financial, and political trends, as well as the business climate, influence financial commitments of local companies in a given country.