Middle East and North Africa Panorama: What progress after the arab spring?

How do the Middle East and North Africa (MENA) economies perform after the social and political turmoil caused by the so-called "Arab Spring" late in 2010? Have social and economic demands of protesters resulted in a healthier economic outlook in these countries?

In the MENA region, there was always a diver-gence in economic performance between oil importing and oil exporting countries, which was reflected in the political and social situation. These differences in economic performances seem to have increased despite the protests and demand for revolution since the start of uprisings in the Arab world. The GDP of hydro-carbon exporting countries increased from 4 times that of the importing countries in 2010 to almost 5 times in 2013. The GDP of Saudi Arabia, the highest in the area is nearly three times that of Egypt.

The current situation varies across the countries. The Gulf Cooperation Council (GCC) economies continue to record relatively high growth rates, but still below the average growth performance between 2000 and 2010. The current account and fiscal surpluses remain ample. However the political and social turmoil rise in some countries like Iraq, Syria, Yemen and Libya negatively affecting the economy.

The oil exporters have diversified their econo-mies successfully into other sectors than hydro-carbon such as construction, tourism, transpor-tation, automotive etc. However in terms of budget and exports revenues, these economies continue to depend mainly on the hydrocarbon sector. Therefore a continued decline in oil prices could weigh on non-hydrocarbon invest-ments, funded by hydrocarbon revenues. In this sense, there are still some challenges to be addressed in these countries. Oil importers face higher risks of geopolitical tensions and regio-nal turmoil. Higher influx of refugees from Syria and further worsening of social and political environment in the region would affect negati-vely the economic environment, drain resources in the economy and reduce the trade volume.

The panorama will focus on hydrocarbon sector for the GCC countries and on the textile sector for the North Africa region, especially Tunisia and Morocco as for both of the regions, these sectors are the main drivers of the economic growth and employment. Despite the ongoing efforts to support non-hydrocarbon industries, the GCC countries remain still quite dependent on the hydrocarbon sector in terms of exports and budget revenues. In the GCC region, hydrocarbon revenues accounted for an average 74 percent of total exports and around 83 percent of total government income in 2013. So the diversification is still a challenge. Further decline in oil prices, regional conflicts, lower demand from China seem to represent principal sources of risk in the sector.

Both Tunisia and Morocco prioritize the development of the textile and clothing sector. In Morocco the textile sector is the largest emplo-yer of the industrial workforce with 40 percent and in Tunisia it is the largest exporter and provides 7 percent of the total employment. The main clients of the textile and clothing compa-nies in these countries are European firms which create a risk in case of a sluggish reco-very in Western Europe. There are also other challenges such as the need for innovation, access to finance and the political uncertainty.

The panorama will also assess the latest trends in construction, tourism and automotive sectors across the MENA region to evaluate possible corporate risks. 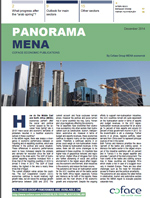